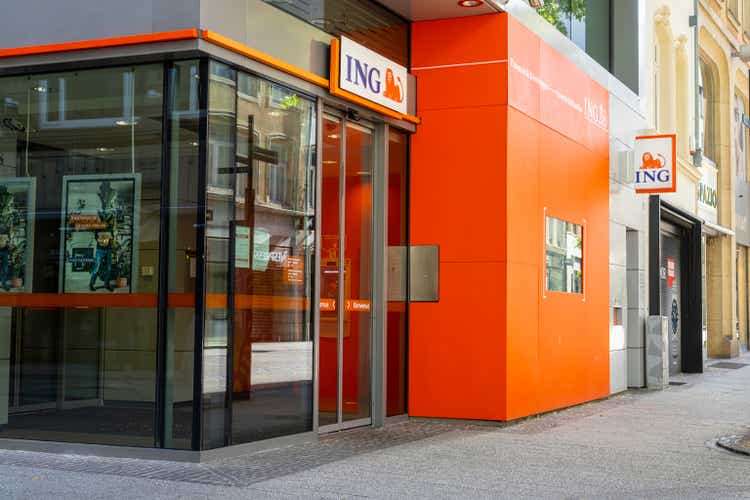 I started to build a small long position in the Dutch bank ING (NYSE:ING) after the February and March correction. The bank had exposure to both Ukraine and Russia and caution was justified. First half results have now been released and I’m happy to see three things: A) exposure to Russia has been reduced, B) normalized earnings are correct and C) an interim dividend of 17 euro cents (1/3 of the distribution rate of the first semester “resilient” income) has been declared.

I will be using the Euro as my base currency throughout this article. All the documentation can be found here (unfortunately the website contains download links only).

Looking at the second quarter results, we see that ING’s net interest income continues to move in the right direction: there was a slight increase of 1.5% on a quarterly basis, while was a more notable increase of 3.7% compared to the second quarter of last year. Revenue net of fees and commissions was down slightly from Q1 (there were fewer prepayments on home loans, which reduced one-time revenue related to prepayment penalties) but, all things considered, the he 1.8% increase in total income was much appreciated.

Expenses have however increased by almost 10% and this is certainly a cause for concern. It does not matter that regulatory costs have decreased on a quarterly basis, as this is mainly related to a seasonal bank tax (payable in the first quarter). What matters are the expenses excluding regulatory costs. Fortunately, ING has included some non-recurring items in these operating expenses. As you can see below, there was a charge of €159m related to “ancillary items”. Most of this additional charge was related to the restructuring cost of €97 million in Belgium and €18 million in the Philippines, while an additional €43 million was recorded due to the impact of the hyperinflationary environment and the impairment of goodwill in Turkey.

Excluding these ancillary items, “normalized” operating expenses were only 3% higher on a quarterly basis, which seems completely normal and acceptable given the inflationary environment. Net income amounted to 1.18 billion euros and includes 202 million euros in provisions for loan losses (in addition to the nearly 1 billion euros recorded in the first quarter of the year). Spread over 3.743 billion shares outstanding at the end of June, EPS was 31 cents. However, on an adjusted basis, the ‘resilient’ net result was higher as ING ignored around €277 million of non-recurring items. This means that the net profit of 1.6 billion euros in the first half (for a reported EPS of 0.43 EUR) was boosted by an additional 7 cents per share. Thus, the “resilient” EPS in the first half was around EUR 0.50 per share.

What about exposure to Russia?

Before focusing on operations in Russia, it is perhaps useful to first analyze the evolution of RWA in the second quarter. The total amount of risk-weighted assets increased by €1 billion to €335.9 billion, but there are some simple explanations for this. At first, I was a little surprised that the credit RWA hadn’t gone down so much. In the footnotes, ING explained that the total amount of RWA increased by €3.1 billion due to higher lending volumes and €4.5 billion due to changes in exchange rates (linked to USD), offset by a benefit of 8.3 billion euros due to the better quality of the loan portfolio. and impacts of the model. Thus, at constant exchange rates, RWA would have actually decreased by 4.5 billion euros, which would have inflated the CET1 ratio by around 20 basis points.

The CET1 ratio of 14.7% is significantly higher than the 12.5% ​​used by the bank as its own minimum target and expressed in euros, there is a CET1 capital ‘surplus’ of EUR 7.4 billion. And this surplus will help to cover the shocks of the Russian-Ukrainian fallout.

One of the main things discussed ahead of the second quarter results was the lack of guidance from ING on how it was reducing its exposure to Russia. The bank provided an update in the Q2 presentation and although progress was made, the total exposure related to Russia decreased from just €2.1 billion to €4.6 billion.

This sounds disappointing, but bear in mind that even though the exposure has fallen, ING has strengthened its provisions: at the end of the second quarter, ING’s CET1 capital already includes 700 million euros of provisions for losses on loans on Russia-related exposure. The bank also provided a breakdown to explain the difference between onshore exposure and offshore exposure.

Although I would have liked to see ING reduce its exposure to Russia a bit more quickly, I don’t think this poses a risk to the balance sheet at this stage. The exposure of €4.6 billion is actually only a net exposure of €3.4 billion after taking into account guarantees and insurance and taking into account that the CET1 capital exceeds the internal target of 7 billion euros and the regulatory minimum of around 15 billion euros, ING should be able to cope with a slow unwinding of exposure to Russia without having to resort to a hasty liquidation as have had to do it from other banks with greater exposure.

HELOC to pay off the mortgage